How to Keep Your Kids Safe this Christmas

During the festive season no one wants to think about danger, as everyone just wants to have fun and to enjoy the time with their family, good food, alcohol and their new gifts.

But this is exactly what cyber-criminals and scammers rely on. The fact that everyone’s guard is down.

And one of the easiest targets for cyber-criminals are kids who are excited at receiving new electronics and don’t pay any attention to online safety. So, how do you keep your kids safe this Christmas?

Many homes now are smart homes, with various devices which are interconnected meaning if one is hacked the entire system can be hacked.

Whilst many are blasé and state, “who cares if the hackers get into the toaster?” it is far more serious than hacking toast.

What happens if they infiltrate the smart toaster, which has the same password as the thermostat, your remote locking device on your front door or your laptop? All of which are connected to the same internet system.

According to Which? most UK households have on average 10 connected devices. As part of a study, they monitored the activity on these devices in one home and within one week there were more than 1,000 hacking attempts with at least 66 being malicious.[1] Within another week there were nearly 13,000 hacking attempts and nearly 2,500 attempts to log in to devices with weak or default usernames and passwords.

The most targeted devices were not laptops as you would expect – as most have anti-virus and anti-malware software installed which prevents many of the attacks – but instead it was a printer, a wireless camera and a smart home security system.

Passwords are always going to be key to keeping your devices safe and never is this more relevant than if you have a ‘smart home’ with numerous interconnected devices. The majority of electronic devices come with a default password which are often such words as admin, password, 123456 and guest. Easy to remember and easy to hack. A study showed that most of these passwords could be hacked in a matter of seconds.[2]

Anyone who hacks into a device using the default password is then likely to have full admin rights meaning they can essentially do exactly what they want within the system.

The best way to prevent these default passwords from being hacked is to change them straight away.

The best passwords are a long stream of random letters (upper and lower case), numbers and symbols, but of course they are notoriously difficult to remember meaning they get written down which is an additional security risk.

Passwords should be at least eight characters long and a combination of upper-and lower-case letters, numbers and characters. Choose a selection of random words and numbers, which you can remember but it’s more difficult to hack (e.g., pUmpk1n%Chick3n*&P0l1Shing)

It is, however, most important not to have the same password for all devices.

Think of the kids

So, this Christmas as your kids are unwrapping their new electronic devices, whether a new camera, gaming system or phone, don’t let the excitement take over. When setting these devices up and connecting them to the internet, make sure the default password and username is changed straight away.

“I’ll just wait until Boxing Day,” could be too late, and you could spend the end of the year dealing with malware or ransomware throughout the house’s smart devices.

Additionally, it could be a time to teach your children some basic cyber security rules such as:

There are many things you can do to keep your networked devices safe this Christmas from two-factor authentication, to anti-virus and anti-malware software, to regular updates. If you want to find out how you can ramp up the security of your online devices give Security Everywhere a call today.

We've emailed you our 5 Simple Steps To Prevent Being Hacked 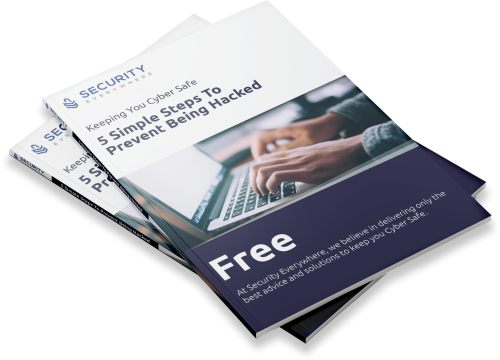